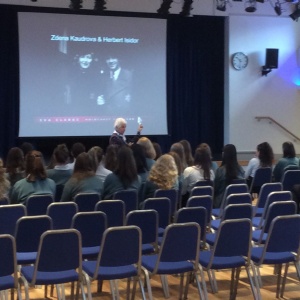 Eva Clarke, who was born in a concentration camp during the Holocaust, visited the Stephen Perse Foundation on Monday (16) to tell her moving story to Year 10 students ahead of Holocaust Memorial Day.

Eva was born in Mauthausen concentration camp on 29th April 1945 and survived against all odds. She has spoken at the Stephen Perse Foundation every year for the last ten years.

Her talk was one in a number of various workshops for Year 10 students, exploring the historical and ethical background to the Holocaust.

Eva said: “I speak because I like to think that to tell one family’s story, everyone can identify with that. It is vital to make the history come alive. Everyone always wants to know what happened at the end – I am very fortunate to have a happy ending.”

Eva’s parents, Bernd Nathan and Anka Kauderová, were sent to Theresienstadt concentration camp in December 1941, just a year and a half after they married, where they remained for three years.

During that time, Anka became pregnant with a son, Dan, who died of pneumonia at only two months. Shortly after this, she followed her husband to Auschwitz, not knowing of its horrors.

Eva says Dan’s death meant her life – if Anka had arrived at Auschwitz with a baby, she would immediately been sent to the gas chambers. Eva’s mother spent ten days at Auschwitz, which she described as ‘hell on earth’. She was already pregnant with Eva, but never saw her husband again. She later discovered he had been shot.

Eva told the Year 10 students of her mother’s horrors during her time at the camps and how she was sent to work at an armaments factory, getting weaker and weaker whilst also heavily pregnant.

In the spring of 1945, Anka was forced onto a train of coal trucks, filled with prisoners, and was taken to Mauthausen concentration camp. By this time, Anka weighed just 5 stone and, Eva said, had the appearance of a living pregnant skeleton. It was on a cart on the way to the camp that Eva was born, weighing just 3lbs, on 29th April 1945.

Eva said: “There were two reasons why I survived – on 28th April, the Nazis ran out of gas for the gas chamber and just four or five days later, the American army liberated the camp.”

Eva and Anka then returned to Prague where they found out only Eva’s cousin and aunt survived. 15 members of their family were killed in Auschwitz. They stayed for three years until Anka met Eva’s stepfather and they moved to the UK.

Anka died in 2013 but Eva continues to speak around the country. She believes that telling others of what her mother and her family went through is important.

Eva told the students: “I tell my story to remember those who were killed and for those people who have never had one person to remember them – communities were destroyed and families were killed.

“My story is just one family’s story. I tell it so we can learn lessons from the Holocaust and to counteract racism and prejudice.”

Helen Kedie, Curriculum Leader of English at the Stephen Perse Foundation, said: “This session was the most important of the day out of all of the sessions for our students. We were extraordinarily privileged to have a survivor talking to us.

“I have heard Eva’s talk about ten times and it never ceases to be as powerful, as shocking and as relevant as the first time I heard it. We are very lucky to have heard it.”

‘During the Year 10 Holocaust Day on Monday, we were interviewed by the local TV station, That’s Cambridge, and Cambridge News; unfortunately we had to sacrifice our morning snack as a result but it was certainly worth it! We answered some important questions about how we felt about the Holocaust and whether we thought it was good to be taught about it in schools. During the day, we were privileged to listen to a talk by Eva Clarke, a Holocaust survivor, whose mother survived three concentration camps, including Auschwitz-Birkenau. She told the remarkable story of how her mother had gone into labour on a coal train whilst being transported to her final concentration camp, Mauthausen, having not eaten for 17 days. Eva weighed only 3lbs when born.

Perhaps the thing that we found most impressive was that despite all the ordeals her mother had been through (all the suffering, having seen friends die before her, having been starved and separated from her husband), she was always optimistic, something I feel we should all learn from.

Another memorable part of her story was when she described the moment on the coal truck when a farmer offered Eva’s mother a glass of milk. A soldier raised his arm to whip her - but for some reason he didn’t: Eva’s mother believed that this drink of milk was the reason she survived. Listening to a personal story such as Eva’s gives you another perspective on the past; you suddenly realise how many innocent people suffered, how families were torn apart and it enables you to understand the impact of the Holocaust on the lives of so many people. Listening to stories makes it seem more real than just reading about numbers in a textbook.

It is hard to visualise 6 million people, but we were told in an earlier workshop on the background to the Holocaust that the number of Jews who died is equivalent to the populations of both Scotland and Wales added up together.

So we told the newspapers that we thought it was vital that we should learn about the Holocaust, even though 70 years have passed since the camps were liberated: learning about this terrible moment in history forces us, as humans, to ensure we never allow such a horrific genocide to ever happen again. We would like to thank Eva Clarke for sharing her amazing personal story; it has really left us wiser about the Holocaust.’