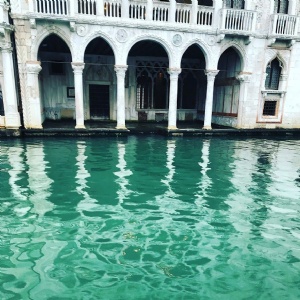 In the extremely early hours of Thursday 19 October, 38 intrepid students set off for Italy accompanied by four members of staff from the Visual Arts, English, Drama, and Modern Foreign Language departments.

“What news on the Rialto?“ asks Shylock in The Merchant of Venice.

This trip was conceived after a lunchtime conversation which discussed the fact that over a third of Shakespeare’s plays were set in Italy. Although Mr Pompeo would like you to believe that Shakespeare was Italian, there is no evidence that Shakespeare ever set foot outside of Britain; however, it being the Renaissance, all he needed was access to a good library and contemporary accounts from others who had travelled there at the time.

Students arrived in Padova which was the setting for the Taming of the Shrew. Shakespeare certainly describes Padova well, making reference to its famous university which was founded in 1222, making it the sixth oldest in the world. Students visited the University and saw the teaching bench of its most famous academic, Galileo Galilei, who was professor of Mathematics in 1592 around the same time that the Englishman was writing “The Shrew”.

Padova is the home of countless Renaissance sites including the famous Scrovegni chapel decorated with masterpieces by the early Renaissance painter Giotto, famous for his ability to draw a perfect circle. Another masterpiece we explored was the baptistery cathedral in Piazza Duomo with its frescoes by Giusto de Menabuoi exploring divine geometry and the depiction of Christ the Pantocrator. There students saw an early polyptych altar exploring early renaissance visions of Armageddon.

No trip to Padova would be complete without a visit to the site of pilgrimage for Catholics: the Basilica of Saint Anthony or as known to locals “il Santo”, holding the relics of Saint Anthony the patron saint of lost articles and shipwreck. We arrived during mass - a small affair with over 1,000 pilgrims alongside the ante chamber containing the vocal chords, lower jaw bone, and preserved tongue of the saint.

Verona was the perfect setting for a workshop on the Italian theatre tradition of Commedia Dell’Arte. We headed to the Teatro Filippini where two Commedia performers Pino and Matteo first explained the context and theories behind this very distinctive style of improvised, masked theatre, and then led us through some practical exercises to demonstrate the basic principles. Some of the students were then invited to perform short improvised scenes before our workshop leaders gave us a full demonstration of how it is done. You can watch a short clip of the workshop here.

Shakespeare was definitely influenced by Commedia Dell’Arte, which was a very popular theatre genre across Europe in the 16th century, and a number of his plays contain characters and scenes that suit this very comic style of performance. One such play is The Taming of the Shrew and we later enjoyed trying out some commedia techniques on scenes from this when we returned to Padova.

Meanwhile, Verona was the ideal place in which to explore and perform scenes from a very different play: Romeo and Juliet.

We began with Natalia reading the prologue for us with the Arena di Verona amphitheatre as a striking backdrop; we staged the opening fight sequence between the Montagues and Capulets with Lara playing the Prince who is struggling to keep the peace in Verona; we visited la casa di Giulietta and the Arche Scaligere (the tomb of the family Scaligeri) and learned of the real-life family feud that may have inspired the play before re-enacting the famous balcony scene on the steps to the torre dei Lamberti.

After an early morning coach ride, we caught a water taxi down the Grand Canal (essentially the Tube for Venetians, though with much better views). The weather was less than favourable, although it brightened up through the day. We first went to see the Damien Hirst exhibition, Treasures from the Wreck of the Unbelievable. The sheer scale of it was incredible: such a variety of sculptures presented in such an amazing city. It stretched across two galleries, almost on opposite sides of Venice; we had a long walk between the two, but it was of course perfect for photo opportunities. (It’s not an Art trip unless each person has the same 1000 photos as each other.)

We then visited the famous square, which was infested with the boldest pigeons we’ve ever seen and sitting on steps was banned; one member of our group bought €3 gelato in order to use the toilet. Still, it was beautiful and a worthy visit.

We later visited the Jewish Ghetto: a sobering experience. We learnt a bit about the history and then wandered around a square, visiting ‘David’s Shop’ where we found some incredible Murano glass jewellery.

By the time we caught the water taxi back to the coach park, it was beginning to rain - luckily the worst weather had been saved till last. We were all exhausted, but happy: we’d visited one of the most iconic cities in Europe and our camera rolls were full with touristy photos.